The railway industry was began in 1864 when Namlooze Venootschap Nederlanche Spoorweg Indische Maatschappij commenced construction of a railway from Semarang to Surakarta, Central Java. Three other companies started to invest in building railway lines inside and outside Java ever since. The three companies that firstly involved in the railway industry were Staat Spoorwegen, Verenigde Spoorwegenbedrifj and Deli Spoorwegen Maatscappij.

After the Proclamation of Independence, Djawatan Kereta Api Repoeblik Indonesia (Railway Department of the Republic of Indonesia or DKARI) was established on September 28, 1945. Establishment date of DKARI is then commemorated as the National Train Day.

Railway management embraced a new era when PJKA was turned into Perusahaan Umum Kereta Api (Perumka) pursuant to Government Regulation No. 57 of 1990. With the new status as a Perusahaan Umum (Perum) company, Perumka provided public services while also earned profit from the provided products and services. In terms of passenger’s services, Perumka offered three classes of service, such as: executive, business and economy classes.

On July 31, 1995, Perumka launched executive-class passenger train service with brand of Argo Bromo JS-950 Train brand that was further developed into Argo Bromo Anggrek Train (KA), which is operated since September 24, 1997. The operations of KA Argo Bromo Anggrek initiated development of other Argo brands, such as: Argo Lawu, Argo Mulia and Argo Parahyangan.

To encourage Perumka towards a service company, on February 3, 1998, the Government issued Government Regulation No. 19, 1998 concerning Transformation of Perusahaan Umum (Perum) Kereta Api into a Perusahaan Perseroan (Limited Company). Therefore, the name was altered into Perusahaan Perseroan (Persero) PT Kereta Api, or known as PT Kereta Api (Persero) or PT KA. With the new status, the Company is operated as a profit-oriented business entity. To keep exercising part of the mission as a public service organization, the Government provided Public Service Obligation (PSO) funds.

Along with the dynamics of the business sector and the growing market demands, KAI is currently also operating other supporting business activities by utilizing its resources. The business lines include property management related to railway services, railway-based tourism, restaurant (on train services and at the stations), including catering and logistics distribution services.

In November 2017, KAI has entered a new stage to seek financing alternative for its business expansion by issuing bonds for the KAI establishment in 1946. The issuance of Kereta Api Indonesia Bonds I of 2017 received a great response from the public and investors. This success has motivated KAI to work harder to fulfill public expectations on the Company’s service excellence and performance.

In its journey, KAI has been proven as a key factor of the country’s growth with its role as backbone of the railway transportation system that has transported 394.1 million passengers and 40.1 million tons of cargo in 2017.

Operating railway and supporting businesses through best business practices and organizational model to provide high added-value for the stakeholders and environment conservation based on four main pillars: Safety, Punctuality, Service, and Convenience. 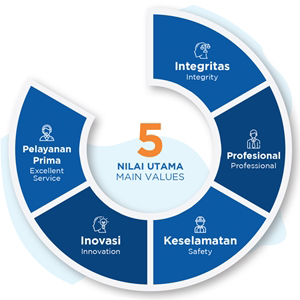 INTEGRITY: Act consistently in accordance with the values of organizational policies and code of conduct of the Company. Have the understanding and desire to adjust to such policies and ethics and act consistently even though it is difficult to do so.

SAFETY: Has an uncompromising nature and consistent in carrying out or creating systems or work processes that have the potential for low risk of accidents and safeguarding the company’s assets from possible losses.

INNOVATION: Always develop new ideas, carry out continuous corrective actions, and create a conducive environment for creation so as to provide added value to stakeholders.